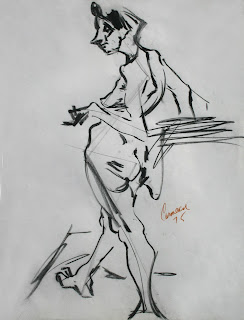 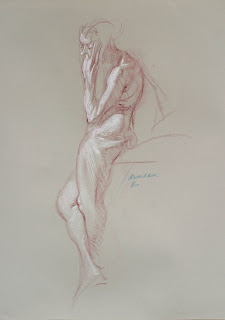 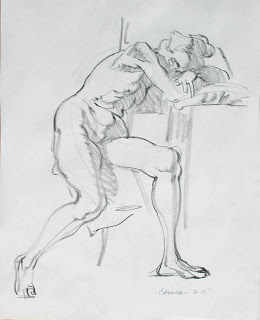 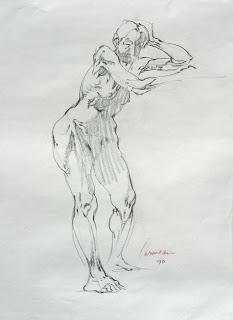 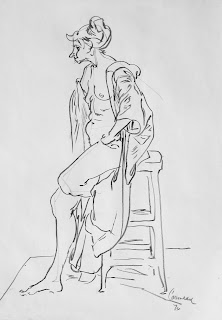 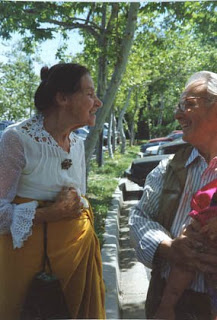 Lala Lezli was a well-known artist’s model in the Los Angeles area who modeled for many artists over the course of her career spanning the 1940’s through the late 1990’s. She modeled until the day she died at age 92 in the late 1990’s. Her distinctive features can be seen in many of Harry Carmean’s drawings and some of his paintings.
She originally danced in New York for Martha Graham’s dance company, coming out to California in the 1940’s and it was in Los Angeles that she began modeling for artists. She was known for her punctuality, reliability and poses that were always held perfectly still. If a class got too noisy she would get their attention, calm the students down and get them refocused on the business of drawing. While not a natural beauty she was visually quite striking and had the kind of body artists love to draw. It had a lot of curves, straight lines and interesting anatomical features, so artists could really get a lot of variety in their drawings. An artist could make her young or old, draw her in a classical or expressionistic, manner, whatever one’s perspective was, it always worked when drawing Lala. The photo of her with Harry Carmean was taken at Art Center in 1992.
POSTED BY MIRIAM SLATER AT 10:36 PM NO COMMENTS: 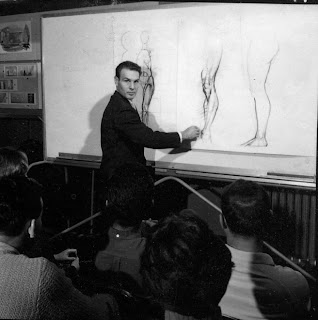 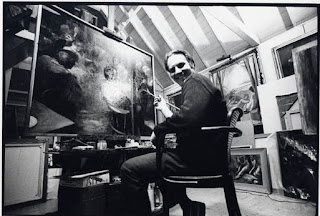 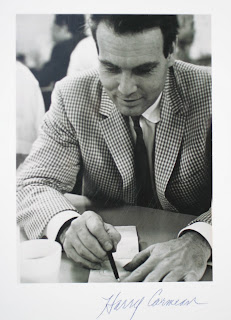 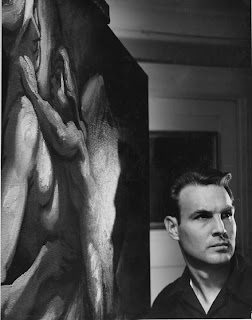 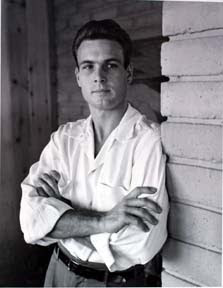 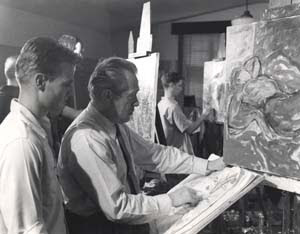 Harry Carmean, (who grew up in the Los Angeles area), was a professional singer before he got involved with art. He had what people wanted in Hollywood at that time - not only did he look good, he also sang beautifully. In fact, he was so successful that he started getting some serious offers from the movie studios even though he had just turned twenty. However, at the same time WWII broke out and Carmean, enlisted and served in WWII which cut his singing career short. After the war ended he went on to study at L'ecole des Beaux Artes in Marseilles and then at Art Center College of Design and the rest is history. The photo below shows him teaching at Art Center and the bottom photo is of him and his teacher Lorser Feitelson - (see later blog on Feitelson who was also a brilliant artist.) As it turns out Hollywood's loss was the art world's gain as I can't imagine the world without Carmean's dynamic and inspiring paintings and, as can be seen from these photos, he was one of California's most handsome painters!

POSTED BY MIRIAM SLATER AT 11:01 PM NO COMMENTS: 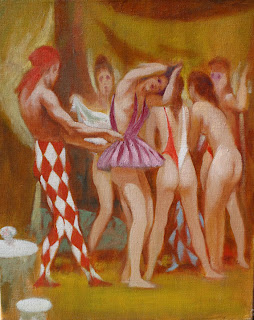 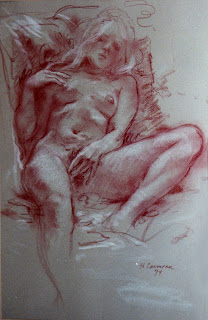 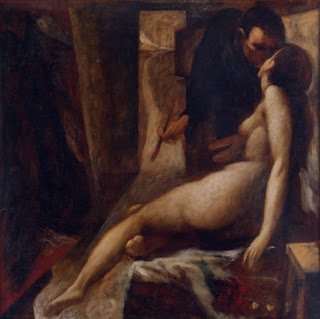 POSTED BY MIRIAM SLATER AT 9:43 PM NO COMMENTS: 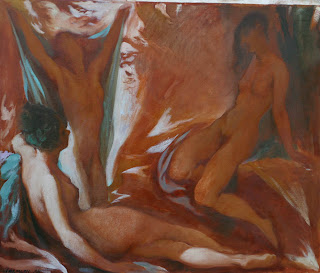 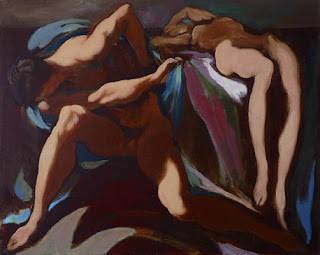 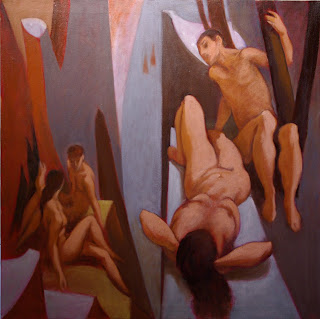 Harry Carmean is one of the few authentic interpreters of Mannerism today which can especially be seen in his monumental figurative paintings with complex compositions. Mannerism, which evolved out of the Renaissance, started as a reaction against the harmonious ideas of classicism (that were the hallmark of the Renaissance) and sought to introduce new visual approaches to painting. The Mannerists of that time explored more discordant and distorted compositions and introduced the idea of making "art for its own sake", a concept relevant to our times. As a way of pushing away from the traditional harmonious way of working, the Mannerists would exaggerate the perspective in their paintings. They put the horizon at the bottom of the painting, used two different perspectives, or employed extreme foreshortening. The figures were more distorted, that is, they were often unnaturally elongated, the heads were too small in comparison to the rest of the figure, and there was an unnatural fluidity to the figures. The forms were distorted and "played with" by the artists, to create interesting new effects. The Mannerist colors were more garish and unnatural, which helped provide visual excitement. Size change within a painting was used with dramatic effect - the very large would be placed next to the very small to create a feeling of monumentality. The ideas mentioned above are what help to make the Mannerists inspirational to the centuries of artists that followed them. In a sense, they were "modern" in the way that they played with form, focused on the aesthetic over the reality, and pushed their audiences' perceptions to the limit.

Harry Carmean remains one of the best interpreters of the Mannerist school of thought because he fully understands the concepts used and has the technique necessary to execute the ideas properly. The unworldly color schemes, elongated and distorted figures, unusual perspectives and/or extreme foreshortening make many of Carmean's paintings excellent examples of concepts seen within Italian Mannerism of the 16 century.
POSTED BY MIRIAM SLATER AT 10:27 PM NO COMMENTS:

French Impressionism and the paintings of Harry Carmean 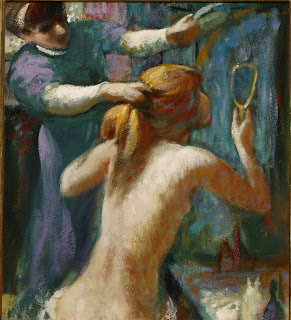 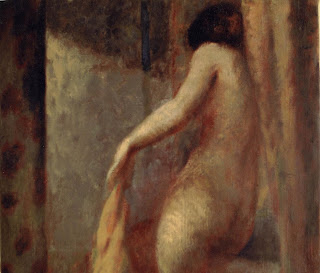 The influence of French Impressionism can be seen in a number of Harry Carmean’s works throughout the span of his career. One of his favorite artists from this period was the French artist Vuillard who was the inspiration for many of Carmean’s early paintings which are darker. These are rarely exhibited but they can be seen in the book Carmeanavailable online. He also was inspired by the work of Bonnard, another French Impressionist who combined a formal Renaissance composition with fanciful undulating colors which vibrate across the surface of the painting.

Throughout Carmean’s career one can also see the ideas of the Impressionist Degas. Degas' work was characterized by impeccably arranged compositions, strongly defined shapes, the use of color to get the eye to travel and the play of straight against curved forms. Other influences include Daumier, Renoir, Lautrec and Cezanne. Cezanne was of particular interest to Carmean because of his emphasis on formal composition and the manner in which he used warm colors with cool colors to define depth. Carmean has the unusual gift to understand and practice a multitude of artistic approaches, such as those seen in the works of the Impressionistic artists just mentioned. The paintings above are excellent examples of Carmean's interpretation of French Impressionism.
POSTED BY MIRIAM SLATER AT 10:04 PM NO COMMENTS: 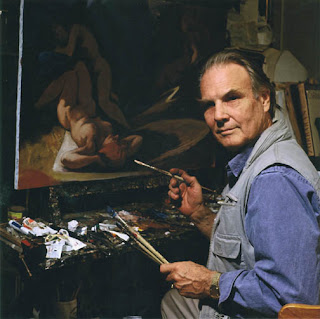 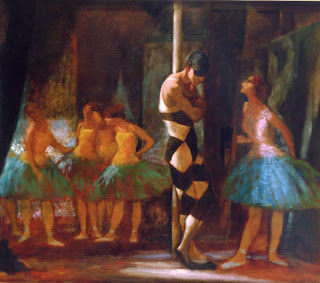 This blog is specifically on the artwork of Harry Carmean who is known for his impeccably composed figure paintings which utilize concepts from past masters and which celebrate the human figure. I am his wife and have studied with him since the late 1970's, which has given me an excellent understanding of how he works. Also, there are many people don't know much about Harry Carmean as a person, so this blog will provide you with a better look at the man behind the paintings. For over fifty years, Carmean has indulged himself in his love of the human figure and provide us, his audience, with some of the more spectacular figurative paintings done in this century. No other contemporary artist, to my eye at least, has been able use the art principles with such mastery, variation and depth. While Carmean had a lot of natural talent, he has always maintained that his success was more a matter of him focusing on art ideas longer and harder than most other people were willing to do. He was also lucky to have been able to work with the well known teacher and artist, Lorser Feitelson, whose influence will be discussed at length in a future blog. Carmean's work is currently available at the Poetic Eye Gallery on ebay, his bio is on wikipedia, some video clips of him drawing are up on You Tube, all of which are good references for those seeking more information about him.

MIRIAM SLATER
I am an artist, writer, and own the Poetic Eye online gallery which specializes in the figurative art of Harry Carmean.

Posted by Miriam Slater Art and Life Blog at 16:56

Miriam Slater Art and Life Blog
I have been studying and creating art all my life and am married to figurative artist Harry Carmean - we have been making art together for forty years and so am sharing some of what we have done in this and related blogs.